From “The Sea Bastards” to “Solidarity Beyond Ocean”: Japanese Dockworkers, the Bandung Moment, and the Politics of Scale. A lecture by David Ambaras, Professor of History, NCSU 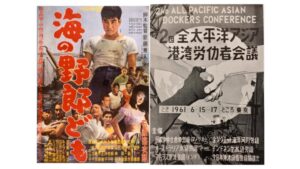 This presentation is an entry point into my current research project on how maritime transport and travel contributed to the making of Japan’s modern world. To date, studies of this topic have tended to focus on Japanese shipping, highlighting business strategies and state-led geopolitical initiatives, without really examining shipping as a series of social processes that not only conveyed millions of people, massive amounts of things, and countless ideas from one location to another but also transformed them, generating new connections, meanings, and forms of agency. Meanwhile, in contrast to a growing body of important work on the Atlantic and Indian Ocean worlds, few scholars have examined the participation of seafarers and dockworkers in the production of Japan’s modern maritime networks and in new types of racial, class, nationalist, anti-imperialist – or pro-imperialist – politics that straddled land and sea.

In cases ranging across the maritime Asia-Pacific and beyond from the turn of the twentieth century to midst of the Cold War, I consider how the organization of infrastructures, labor markets, and commodity flows, the embodied practices of Japanese and non-Japanese maritime workers and passengers at sea and on land, a variety of cultural representations, diverse politics of mobility as well as politics of comparison under different imperial regimes, and the dynamism of the ocean itself all reconfigured these historically layered maritime zones and permitted the re-scaling of Japanese engagements with the world. In particular, I want to reflect on how scale is produced and operates in the world. Rather than treat terms such as the local, the national, the regional, and the global as self-evident, we can approach each scalar formation as a historical process and product. A contingent assemblage consisting of relations among heterogeneous, independent parts that may adhere or leave, scale is something imagined, performed, and contested by historical actors through specific sites and practices.

To preview this project, I want to introduce an example of how a version of “the global” – or rather, an intersection of several actual or potential “globals” – emerged in Japan in the late 1950s and early 1960s, around dockworkers and the politics of the so-called Bandung Moment.

Discussant: Martin Dusinberre, Professor and Chair for Global History at the University of Zurich.

All events this semester will be held via Zoom