The Triangle Center for Japanese Studies currently supports two cross-institutional research groups: Japanese History and the Working Group on the Future of Japanese Studies. These groups, made up of both faculty and graduate students, meet regularly to discuss publications and developments in their fields of interest, listen to invited speakers, and organize public events. The Center welcomes proposals for new research groups that unite faculty and students from across the Triangle. For more information on funding requirements, visit Programs & Grants.

TCJS-affiliated faculty and graduate students are also active in other Japan and Asia-related research clusters, such as East Asian Religions and Trans-Asian Media Cultures, that are sponsored by Duke’s Asian / Pacific Studies Institute and the John Hope Franklin Humanities Institute.

Working Group on the Future of Japanese Studies
With faculty from UNC, Duke, and NCSU as members, this group serves as the steering committee for the Triangle Center for Japan Studies. They meet periodically to share ideas for expanding and strengthening Japanese Studies at the three universities and throughout the community, including discussions of possible events, collaborative projects, and funding opportunities.

Japanese History
This reading group, including numerous faculty and graduate students from Duke, UNC, NCSU, and Elon University, meets monthly to discuss publications on classical and modern Japanese history. The group alternates between pre-modern and modern history topics, with occasional guest speakers and discussion of members’ recent publications. Through these meetings, members strive to keep up with scholarship in Japanese history and encourage faculty and graduate students of all disciplines to share their expertise.

Relocating Empires in the Asia-Pacific
The collaborative project “Relocating Empires in the Asia-Pacific” (REAP) brings studies on the Japanese empire into long overdue conversations with ongoing debates in colonial and postcolonial studies. By associatively thinking together and collaboratively inquiring into a cluster of comparable and interlocking topics such as modernities, visual cultures, religion, tourism, the Cold War, race relations, and so forth, members hope to address significant gaps and the unevenness extant within the current terrain of empire studies. By bringing together conversations that have been sequestered into separate camps, we plan to open a new chapter in studies of colonialism, empires, and postcoloniality. The group aims to build a network of scholars in the Triangle and beyond.

East Asian Religions
This research group meets monthly to read the work of a scholar in East Asian religious studies. Wherever possible, the group invites the author to join the discussion group. Once a semester, the group sponsors a special lecture on East Asian religions. Current membership includes faculty members from Duke, UNC-Chapel Hill, UNC-Greensboro, East Carolina University, Wake Forest University, Davidson College, UNC-Charlotte, NC State University, and Elon College. The group also includes a number of graduate students from area universities. More than half of the participants are Japan specialists. The group maintains a mailing list for the purpose of planning events. Anyone with an interest in East Asian religions is welcome to participate.

Triangle East Asia Colloquium (TEAC)
TEAC was established in 1972 to improve contact between East Asian faculty at Duke University, North Carolina State University, and the University of North Carolina at Chapel Hill. TEAC has since expanded to include East Asian specialists and other interested scholars from across North Carolina and throughout the Southeast. TEAC chooses a coordinator each year from one of the three institutions to organize its annual conference and to manage the affairs of TEAC.

Trans-Asian Media Cultures
The scope of this group includes both the arts of the moving image and also text-based “screen” media such as blogs, wiki-style sites, cell texting, twitter, etc. The group is especially interested in how these hybrid visual and textual media help create virtual spaces within which individuals may negotiate their relationship with larger communities, with various corporate and political institutions, and with the State itself. The group consists of Duke faculty working in fields related to modern Asian cultural studies, and based in AMES, Cultural Anthropology, English, Theatre Studies, Art History, and Literature. Activities include approximately six group meetings during the academic year, which typically center around a discussion of select readings or cultural texts. In some cases, other area studies faculty, graduate students, and outside scholars and artists are invited to join these conversations.

East Asian Language Pedagogy
The language pedagogy program actively promotes interaction and cooperation on research, pedagogic, and administrative issues among the East Asian language instructors at Duke and across the Triangle.

Triangle Japan Forum
The Triangle Center for Japanese Studies grew out of the Triangle Japan Forum, and the Forum presently still exists as a joint research group between faculty at Duke, NCSU, and UNC, co-coordinated by professors at UNC and Duke. As part of its goal of highlighting the strength of the Japan Studies community in the Triangle and raising the profile of the subject at the three universities, the Triangle Japan Forum hosts a number of events on each campus, including lectures and lunch workshops where members’ research and forthcoming publications are discussed. 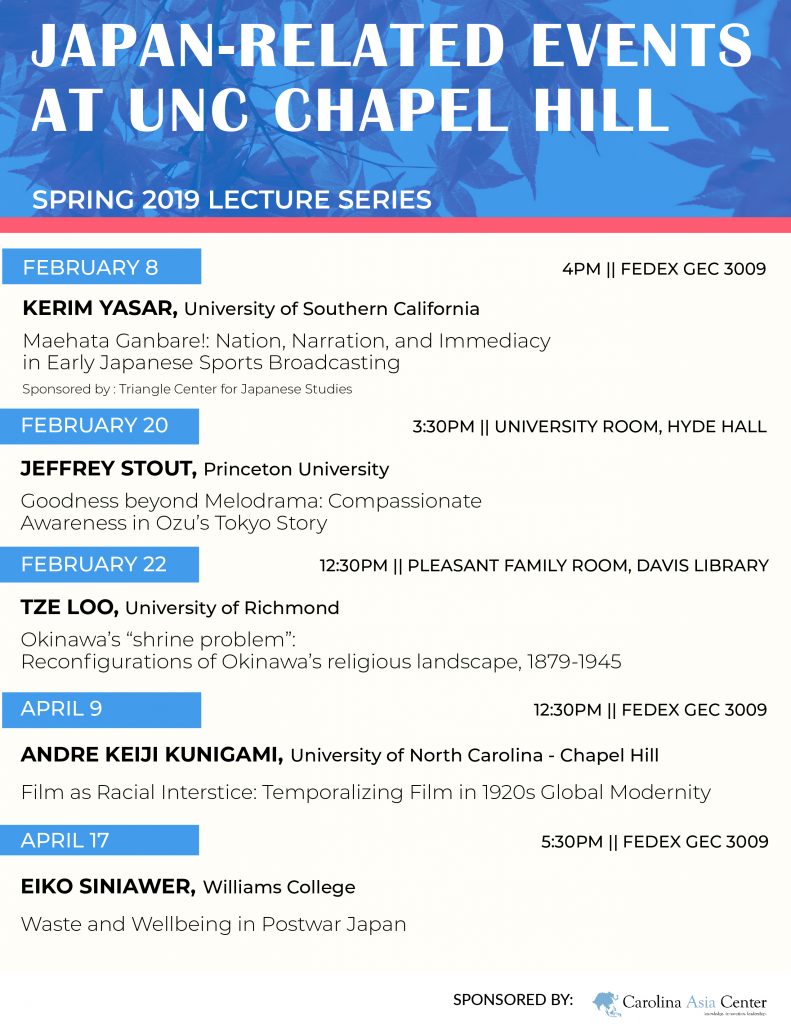